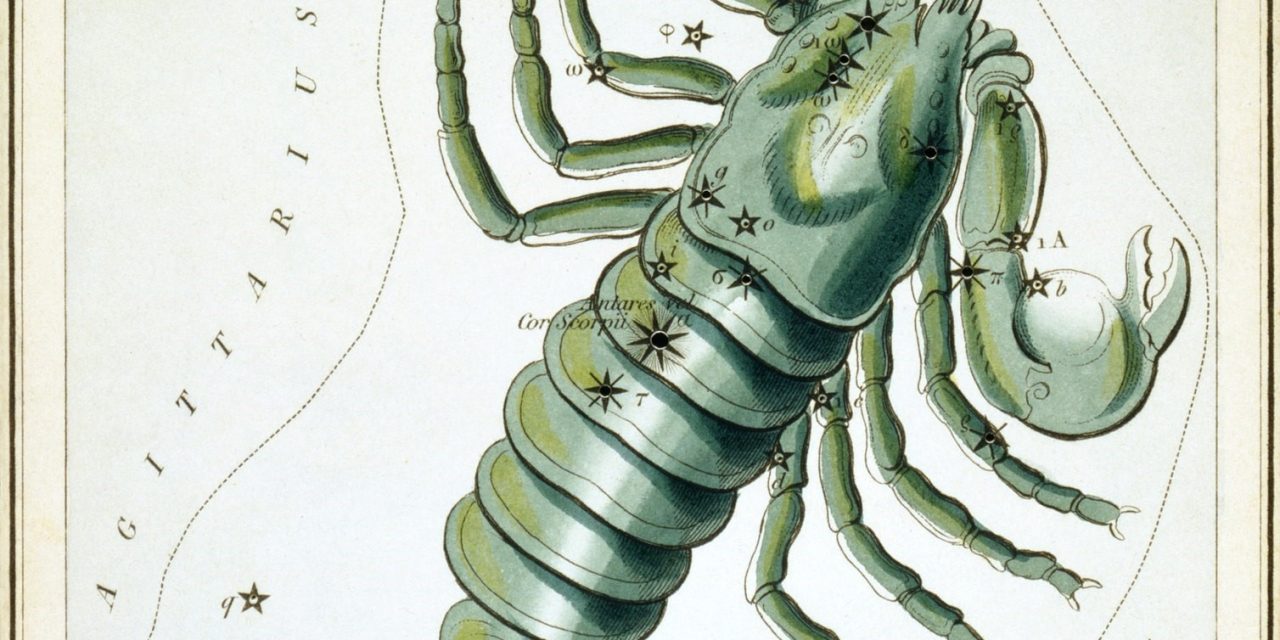 The evening skies of September

September 5: The first quarter moon is in the southwest, above the red heart of the Scorpion. Around 9 pm look to the south-south west for the moon and the constellation of Scorpius. The bright red star is Antares, which is the heart of the scorpion. The star is a red supergiant, near the end of its life. If placed at the center of the Solar System, Antares would extend to the belt of asteroids, between the orbits of Mars and Jupiter. Its mass is around 12 times that of the Sun; its age of 11 million year is more than twice that of the sun, and it is about 550 light years from Earth. Its traditional name is “rival-to-Ares” (“opponent-to-Mars”), due to the similarity of its red color to Mars.

On this night there is a beautiful triangle formed by the moon, Jupiter, which is the very bright object to the left of the moon, and Antares. Throughout September Jupiter moves slowly eastward, away from Antares. Binoculars will give you a view of its four bright moons.

Saturn is in Sagittarius, the next constellation to the east, looking like a teapot. It will be moving retrograde until September 18, when it stops and hangs above the handle of the Teapot. This month will be a good time to find a small telescope to see its beautiful rings.

September 6: The moon will have moved eastward to a spot above the two stingers on the tail of the Scorpion.

September 7: The moon will be close to Saturn in Sagittarius.

September 9: The moon, growing in size, will entering Capricornus.

September 14: Harvest Moon. The full moon will be in Pisces, just below the circlet of stars. It is a large but faint constellation. It’s easily visible in the dark skies of Crestone, but probably not so visible on the night of the full moon. Try to find it earlier in the month before the moon has reached it. It is opposite the sun during this month, rising in the east as the sun is setting.

September 23: Autumnal equinox occurs at 1:50am MDT, when the sun crosses the celestial equator moving from north to south. On a flat horizon, the sun would be rising exactly due east except for the effects of refraction by the atmosphere, which bend the light of the sun so that we can see it below the horizon.

Constellations of the Month: Scorpius & Pisces

Scorpius is one of the oldest constellations named by humans and for good reason: it looks like a scorpion with two pinchers on its tail. According to Greek myth, these pinchers killed Orion, who besides being a great hunter was also something of a boastful bully. He once boasted to Artemis, the goddess of the hunt, that he could kill every animal on Earth, if he wished. Although Artemis was a hunter herself, she offered protection to all creatures and was so outraged about his claim, that she sent a scorpion to kill Orion. The battle between the two was so lively that the king of the gods Zeus raised the scorpion to heaven. Sometime later, at the request of Artemis, Zeus did the same for Orion, not to praise him, but to serve as a reminder for mortals to curb their excessive pride and hubris. Just to be safe, Zeus placed them at opposite sides of the heavens: no more battles! Orion dominates the winter skies while Scorpius is visible during the summer.

The story of Pisces involves the Roman goddess of beauty, Venus, and her son Cupid, who has a bow and quiver of arrows and could make human, gods, and animals fall in love by shooting them with the arrows. Venus could cause people to fall in love because of their appearance and beauty. The pair were threatened by Typhon, who was one of the most evil demons in the mythological cosmos. With feet of serpents and a head of tangled snakes, Typhon is described as a viper who spat out showers of poison from his throat, and whose viperish feet crawled into the caverns underground, spitting poison! To save themselves, mother and son changed themselves into fish and escaped into the ocean. In order that they would never be separated, they bound themselves together with a rope. We see them today in the sky as two fish connected by a cord of star. The most prominent feature of the constellation is the faint circle of stars on the right hand side. Orion was punished by his hubris, and so was the monster, Typhon. He challenged Zeus for control of the universe, and in a fierce battle was destroyed by a thunderbolt hurled by Zeus. Typhon is buried beneath Mt. Etna in Sicily, which occasionally belches forth fiery poisons.