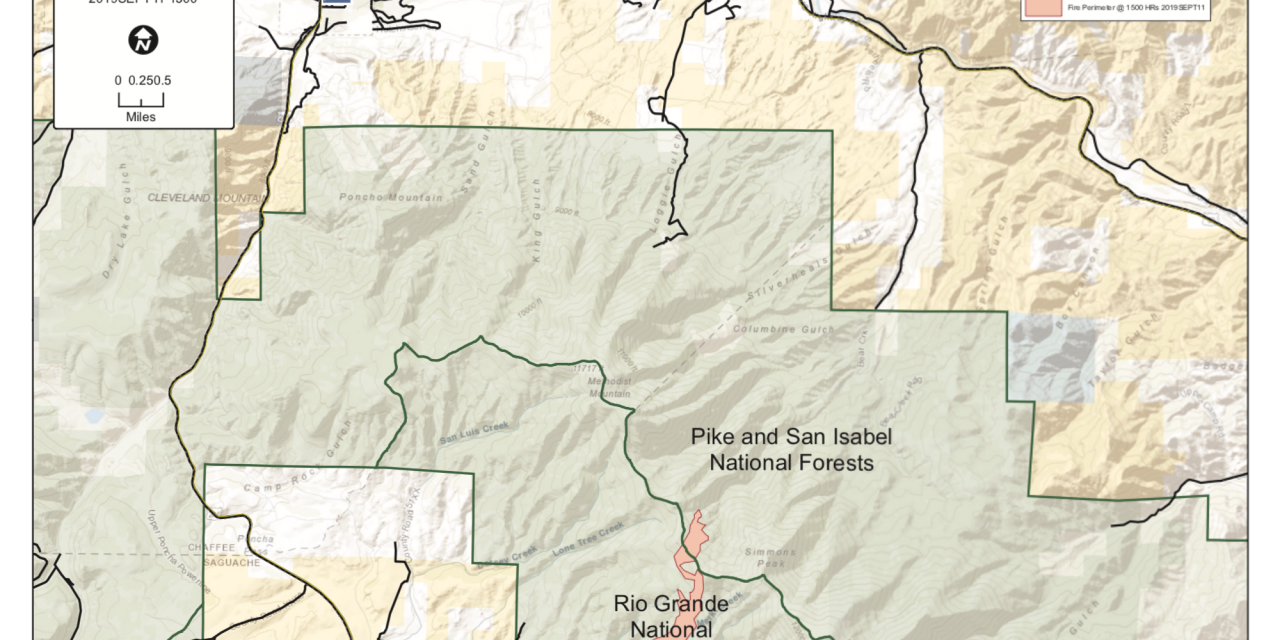 The 263 acre Decker wildfire is located in northeastern Saguache County, approximately 8 miles south of Poncha Springs. Winds near the fire on Friday will primarily be out of the west and southwest, transporting smoke to locations east and northeast of the fire. This could bring periods of light to moderate smoke to Salida, Cleora, Wellsville, and Howard. Friday night and Saturday morning, drainage winds will allow smoke to settle in locations below the fire, both to the south and southwest in northeastern Saguache County, and toward the east or northeast in western Fremont County. Areas with the best chance for smoke will be along and near US Highway 285, from Alder south to Villa Grove, and in areas of the Arkansas River Valley near State Highway 50 near Wellsville and Howard.

The 2,571 acre Hunt wildfire is located in southern Rio Blanco County, approximately 30 miles southwest of Meeker. Winds near the fire will primarily be out of the west and southwest on Friday. This will transport smoke to locations east and northeast of the fire, perhaps bringing some brief smoke to White River City and Meeker. Friday night and Saturday morning the winds will be light, which may allow smoke to settle in low-lying terrain immediately below the fire to the northeast. This could bring periods of smoke to residences along County Road 5 to the east of its intersection with County Road 26..

Several prescribed fires are occurring in southwestern Colorado. Smoke may be visible at times from these fires, particularly along State Highway 160 from Durango eastward through Bayfield to Pagosa Springs. In areas with active fire activity and lingering smoke, unusually sensitive people should consider reducing prolonged or heavy outdoor exertion through the weekend, particularly during the early morning hours when smoke will likely be heaviest.

Light to moderate concentrations of smoke are also possible near small wildfires and prescribed burns around the state.

What if there is a wildfire or smoke in your area?
The focus of the Colorado Smoke Outlook is on large fires (e.g., greater than 100 acres in size). Nevertheless, smoke from smaller fires, prescribed fires, and/or smoke from new fires not yet known to CDPHE air quality meteorologists may cause locally heavy smoke. If there is smoke in your neighborhood, see the public health recommendations below.

Public health recommendations for areas affected by smoke:
If smoke is thick or becomes thick in your neighborhood you may want to remain indoors. This is especially true for those with heart disease, respiratory illnesses, the very young, and the elderly. Consider limiting outdoor activity when moderate to heavy smoke is present. Consider relocating temporarily if smoke is present indoors and is making you ill. IF VISIBILITY IS LESS THAN 5 MILES IN SMOKE IN YOUR NEIGHBORHOOD, SMOKE HAS REACHED LEVELS THAT ARE UNHEALTHY

ACTION DAYS: An Action Day for fine particulate matter (particulates), carbon monoxide, ozone or other pollutants indicates that either current air quality is unhealthy or conditions are expected to worsen later in the day or on the next day. Action Days for air pollutants generally indicate that air quality will be in either the Unhealthy or Unhealthy-for-Sensitive-Groups categories according to the Air Quality Index. Action Days trigger voluntary pollution prevention measures, which may vary by season, and public health recommendations.

The AIR QUALITY INDEX reports the daily level of air pollution on an hourly basis. The index reports the highest level of either carbon monoxide, fine particulates or ozone depending on which pollutant has the greatest hourly concentration. Values greater than 100 for carbon monoxide, fine particulates and ozone indicate exceedances of the pollutant’s state and federal standards. Air Quality Index values between 0-50 are good, 51-100 moderate, 101-150 unhealthy for sensitive groups, 151-200 unhealthy, 201-300 very unhealthy, and over 300 hazardous.

COLORADO OPEN BURN FORECAST: For those with permits for Open Burning, that is burning of waste materials or vegetation outside, check the following webpage to find out if open burning is allowed today:
http://www.colorado.gov/airquality/burn_forecast.aspx

ABOUT THE AIR QUALITY INDEX:
http://www.epa.gov/airnow/aqi_brochure_08-09.pdf

Wetmore fire grows to 1742 acres in one day