For many of  us Guan Yin is a two-foot garden-variety goddess made in China, a sweet decoration out in the flowers. Now, imagine her 120 feet tall, cast in bronze. There is such a Guan Yin, brand new and shining, on the island of Penang in the Strait of Malacca. The towering figure, dropped into place by helicopter in 2002, dominates Kek Lok, one of the largest and oldest Buddhist temples in Southeast Asia. She is powerful but non-militant—serene as she contemplates an imaginary willow twig (some say it’s a lotus) in her left hand while pouring something (pure water, it is said) from a vase in her right hand.

In Singapore, also an island in the Strait, a massive new Buddhist temple and museum divides its main floor between two back-to-back sanctuaries, one for the Buddha and one for Guan Yin. Here, she rests in what is called the “noble pose” on a lotus throne with the vase and the twig and graceful extra arms to help those who suffer. While monks chant coolly before the tranquil Buddha in his hall, laypeople kneel and pray, some quite emotionally, in hers.

The curators of the museum of Buddhist-inspired art on the third floor of the temple tell the story of the Buddha in a close personal way. (Text beside a stone carving of Siddartha on horseback: “What is that? A person? Why is his back so bent? Why does he seem so wobbly, trembling as if in fear? And his hair, why is it white, so different from the rest of us?”) Perhaps the emotionally evocative text was inspired by the equal presence in the museum of Guan Yin. One of the most memorable pieces shows her floating,  weightless and graceful,  by contrast with the rigid stone images of the Buddha.

The $50 million Singapore structure, called The Buddha Tooth Relic Temple and Museum,  covering  a square block in historic “Chinatown”  was completed only a year ago.  On Penang, the Guan Yin pavilion with its 16 dragon pillars and thousands of cast-stone images was dedicated just last December.

These two offshore islands with their shining business towers are populated predominantly by ethnic Chinese living in apparent peace with the overwhelmingly Muslim population of the region. (Penang belongs to Malaysia; Singapore is an autonomous city-state between Malaysia and Indonesia.) The “overseas Chinese,” as they are called, are descendants of migrant workers drawn to the British colonial sea ports in the 19th century. These people have lived through European colonialism, Japanese occupation, the effects of the Chinese revolution, and runaway Westernizing . . .  only to prosper. Publications about both religious projects emphasize they were funded by private donations, namely from the affluent Chinese business community.

I inferred that Guan Yin plays a big part in a conserved religion that was nearly erased in Maoist China and that she seems to be gaining in popularity. But who is she?

The references say her name is short for Guan (to listen) Shi (world) Yin (cries). She listens to the cries of the world, like Avalokitesvara (Kannon in Japan), the bodhisattva of compassion who is venerated throughout Asia. (The mantra Om Mani Padme Hum is about Avalokitesvara, not the Buddha.) She is Avalokitesvara. But what seems to appeal to these overseas Chinese is a more specific story: about a princess named Miao (slender girl) Shan (goodness).

Miao Shan was the third daughter of a powerful king. Her obedient sisters let their father choose husbands for them, but when it came time for her to marry, she refused. The king imprisoned her under the supervision of cloistered nuns, and when she refused again, he burned down the monastery. The nuns all died, but Miao Shan survived. Her father had her strangled to death, but her spirit lived on. When he became fatally ill she appeared to him and sacrificed her arms and eyes to make a medicine that cured him. He was so moved he converted to Buddhism, whereupon she revealed herself to be Guan Yin.  For hundreds of years pilgrims in China honored her birthday.

The Chinese brought this tradition of venerating her to Southeast Asia. Wherever there is a Buddhist temple you will find Guan Yin. On a hillside above Sandakan, a predominantly Muslim city in Malaysian Sabah, Borneo, our Chinese guide took us to an immaculate temple with three ornate Buddhas. There, we found Guan Yin outside watering, so to speak, the flowers.

Some Western scholars find it important to identify Avalokites-vara as male, but it is clear to me that Guan Yin represents feminine energy, which is to say, the Yin of the Yin-Yang. To use a Crestone simile, if the Yin is low-lying like water, the spirit of the valley, then Yang is high-rising like hard rock, the spirit of the mountains. In the fullness of time, water will erode rock. But the unity of female and male forces is more important. This is basic Taoism, a native Chinese religion, which influenced the most influential form of Buddhism, Ch’an (Zen in Japan), to come out of China.

Chinatown beneath skyscrapers in Singapore.

I thought not of the Tao Te Ching and its poet called Lao Tzu but of early psychology and Carl Jung. The recognition of the male and female souls and the healing power of their unity was essential to his medicine. There in the new Singapore temple, it seemed, that unity was symbolized by the two main altars, the Buddha and Guan Yin, back to back.

This is the first of three articles about popular religious practices in three Buddhist cultures: Chinese, Thai-Lao and Himalayan. The writer is a journalist (UPI, AP, Albuquerque Journal) who has retired in Crestone-Baca, where he writes a blog called Crestone Conglomerate. 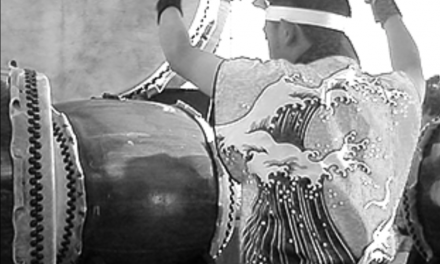 One person, one vote . . . except when electing POTUS

Is the Tessera application going forward?