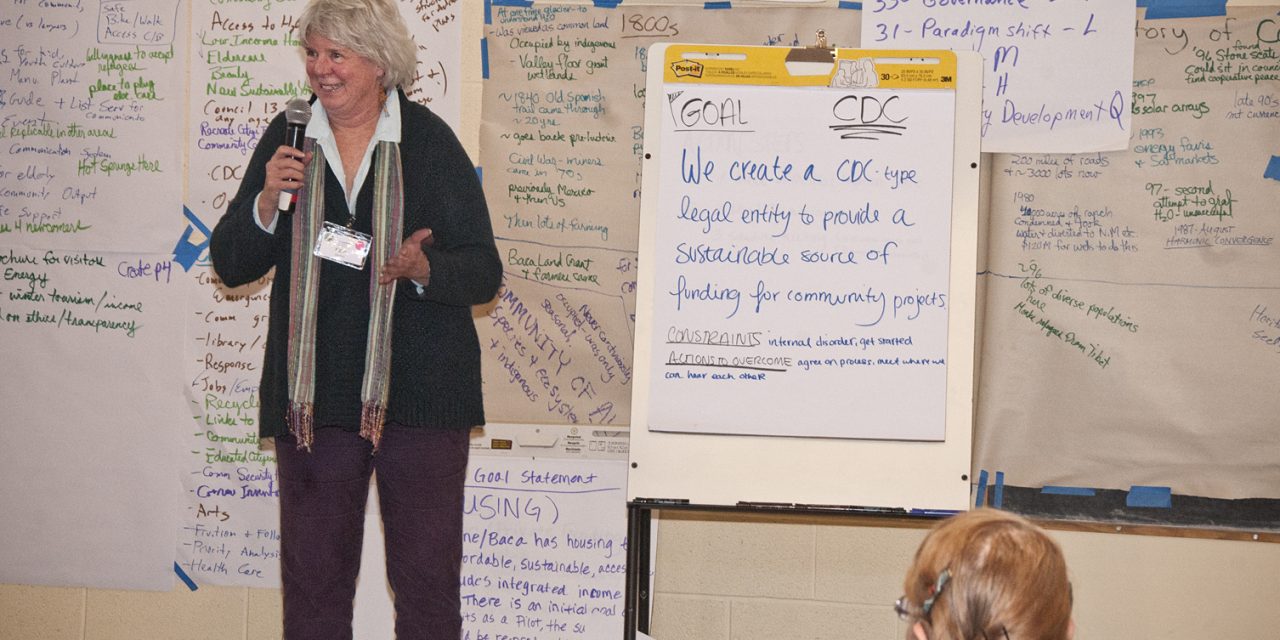 Two years ago this spring, a locally organized “search conference” brought together some 100 Crestone/Baca residents, in a cross-section of ages, vocations, and perspectives. Held at Colorado College, the goal of the professionally facilitated three-day event was to determine the community’s vision for becoming more resilient, self-sufficient, and a better place to live for all its residents—and to begin working toward those goals.

The gathering resulted in the establishment of eight action groups, focusing on resiliency in energy, water, food, housing, governance, a community center, community development, and paradigm shift. In addition, representatives from each group, along with the conference-organizing stewardship team, comprise the Crestone Baca Resiliency (CBR) Council, which meets monthly to network and support the action groups.

At the CBR Council meeting and year three anniversary celebration in mid-July, Kate Steichen paraphrased a quote from a Harvard Business School professor that has relevance for CBR: “Most if not all successful major companies in the world have mission statements that are unattainable. Nevertheless, they hold to these missions as inspiration.”

Here’s a look at where the action groups are today, as CBR celebrates moving into a third year of community involvement and dedicated activity on behalf of all of us and our community’s future.

Under the leadership of Ginny Ducale and Sharon Landrith, the Food Action Group continues to aim for a greater level of local food self-sufficiency. Recent efforts include researching viable locations and infrastructure for community food gardens and greenhouses; obtaining a Saguache County Sales Tax grant (with assistance from CBR’s Community Development Group) for community garden materials; and working to assist Little Shepherd in the Hills Episcopal Church in designing and establishing a community garden.

Ginny has also helped promote the Valley Roots Food Hub program provided by the SLV Local Foods Coalition, which builds relationships between local farmers, restaurants, and food distribution organizations. In addition, the Food Group has created a list and plans to map all local food gardens and greenhouses (for gardeners who want to be included). At the year three anniversary celebration, Ginny said she believes the community is “on our way with food, in every way, and hopefully it will spread to everyone.”

Passionate water advocate Janie Thomas has led the Water Action Group’s efforts along with John Loll, who last year was appointed to the board of the Baca Grande Water & Sanitation District. The Water and Sanitation District provides water and sanitation services to all Baca properties other than the Grants (where residents have private wells and septic systems) and sanitation to the Town of Crestone.

As a BGW&SD board member, John has been instrumental in encouraging the district to take concrete steps toward establishing renewable energy sources—specifically solar photovoltaic and micro-hydro—for its water pumping and other power needs. As part of this effort, the BGW&SD is in the process of developing a master plan for prioritizing its energy use needs.

Another major area of concern for local water advocates is opposing an ongoing effort to export San Luis Valley water for use on the Front Range. The (dubiously named) Renewable Water Resources Group, headed by Sean Tonner, has proposed building a pipeline over Poncha Pass to export 22,000-acre-feet of water from the valley.

The CBR Water Action Group, in conjunction with the Paradigm Shift Action Group, is also in the process of creating signage to remind the public of the sacredness of water. Incorporating paintings by local artist Marika Popovits, the weatherproof signs may be placed near public trails along Crestone area creeks flowing down the mountains.

The hardworking Energy Action Group continues to research possibilities for greater community and individual self-sufficiency through affordable renewable electric generation, in particular from the sun. Energy Group members are in communication with members of the photovoltaic industry in this regard.

Among the goals: finding affordable photovoltaic components and installation options for individual residences and potentially for community solar applications; and facilitating a website that can assist in determining household electric needs and the options and cost of using photovoltaic to fill those needs.

In the area of solar power educational outreach, the Energy Group in June hosted a free “Solar 101” class, led by Laura Conchelos, solar installer and owner of Sandhill Solar in Monte Vista. With enough interest, a second-level solar course will be organized, to include detailed information on various photovoltaic systems and costs.

Other Energy Group activity has included successfully promoting the election of local resident and Energy Group member Wade Lockhart to the San Luis Valley Rural Electric Cooperative (SLVREC) Board. The Energy Group monitors SLVREC’s policies and its long-term contract with Tri-State Generation and Transmission Association, Inc., which limits the cooperative’s renewably-sourced energy to only 5%.

The Energy Group will have a booth at the Aug. 16-18 Crestone Energy Fair, with CBR-logo baseball caps for sale and solar gadgets on display.

During the past two years the Governance Action Group has met with various state, county, town, and POA officials in an attempt to determine the viability of alternative governance forms. The group plans to soon publish a summary of its research and conclusions, both in the Eagle and on the CBR website. Also in the past year, the CBR Governance Action Group created CARE (Community Action for Response to Emergency), an initiative in which neighborhoods of choice meet to prepare for emergency situations. John Luke Wall introduced CARE to the community at a special emergency preparedness event in March 2018, organized by Michael Dunn of the Paradigm Shift Group.

Along with organizing the CBR three-year anniversary celebration, Paradigm Shift Action Group members continue to work individually and with other community members to bring people together in ways that support a positive change in collective consciousness. In recent months group member Carolina Brown was instrumental in gathering neighbors in a respectful, cooperative way (reflecting what she sees as a larger shift happening, from “me” to “we”) in response to concerns about the Forest Service’s proposed mitigation project on FS land just east of town.

In March, Carolina and Allison Wonderland performed a silent movement piece beside a local creek to honor the water’s sacredness on World Water Day. Sarah Hautzinger, a Paradigm Shift member and anthropology professor at Colorado College in Colorado Springs, plans to once again bring students to the school’s Crestone campus in conjunction with courses on religion and rituals and life in the Anthropocene. On previous such visits, students met with members of CBR action groups and other local organizations to reflect on issues related to sustainability, resilience, and spirituality. Sarah also will have student research interns available this summer to assist CBR action groups.

The CBR’s Affordable Housing and Community Center action groups are currently inactive. For more information on CBR activities, visit crestonebacaresiliency.net, where CBR Council minutes from the past two years provide additional information on the groups’ activities.

Solar energy & the future of the San Luis Valley (February 2009)