In mid-October I returned from a pilgrimage to the United Kingdom. You might be asking yourselves, “Why a pilgrimage to the UK?” Well Bapu (the original receiver of the Hari Om mantra practiced at Sanctuary House) was holding a retreat in Wales, and Ireland has been a place that I’ve always wanted to see, so off I went. The meditation experience was superb, and I left the retreat feeling very steeped in the mantra and the gifts that accompany it.

Along with William and Barbara Howell and two other folks, I left Wales to explore Bath, Avebury, Stonehenge and Glastonbury. While there were extraordinary experiences wherever we traveled, and of course far too numerous to detail here, the energy of the stones at Avebury and Stonehenge stands out. These are two of the most notable prehistoric temples constructed by Neolithic man in Britain. The group was fascinated by the different energies the two sites hold.

Avebury is a large, spread out arrangement of megalithic stones with a small 100-year-old village superimposed within the site. One of the joys of Avebury is that the stones are accessible to the public. Our little group had great fun, hugging and sitting with these giant elders, and discovered that distinct stones seemed to affect distinct chakra centers. We worked hard to recognize and discover the lay lines of energy connecting certain stone points, and to ascertain how the site served the planet energetically.

Stonehenge, in comparison, was more condensed and concentrated, looming on the Salisbury Plain (with two highways running past). At Stonehenge one is requested not to approach the stones, but their grandeur, power and energy embrace you where you stand.

Our last stop as a group was the town of Glastonbury. The British Celts and Druids believed Glastonbury to be the mysterious Isle of Avalon. Christendom lays claim to Glastonbury as being the first European site of The Church.

I truly felt the place to be steeped in magic, containing numerous vortex sites that captured the imagination and rejuvenated the soul. The town today has an overwhelming population of psychic intuitives and healing practitioners. Coupling this with the vortex energy, I was not surprised that it felt like home.

The three major places of pilgrimage that I visited in Glastonbury were the Tor, the Abbey and the Chalice Well. The Glastonbury Tor stands atop a hillside and is a powerful vortex site. The Druids carved elaborate terraces on the hillside, ascending upwards to the Tor, creating a labyrinth. Obviously the walk upwards was a powerful moving meditation, and the site seen from above perfectly illustrated the blending of masculine and feminine.

The Glastonbury Abbey was a massive Christian center, developed on the site of the little Church of Wattle, founded by Joseph of Arimathea (Jesus’ great-uncle). Thomas Cromwell destroyed the magnificent community under orders of Henry VIII. However the ruins that remain contain a powerful Christic energy, magnified and enhanced by the lay lines that connect the Abbey with the sacred vortex sites in the area. My favorite meditation seat was directly in between what I call the Namaste hands, two facing well ruins.

The Chalice Well includes a magnificent natural spring, cascading down a hillside, and it is believed by some that the Holy Grail is buried there. The well cover bears the ancient symbol of the vesica piscis, and the natural spring water is rich in iron giving the water a red color, hence the original name the Red or Blood spring. The curative power of this water has been documented throughout history.

The upper portion contains the well itself, with its magnificent ironwork cover. The water then travels into Arthur’s Court, an enclosed area with a small healing pool. The water collects in a freeform sculpture, taking it down into the Vesica Pool. All three of these stages are surrounded with magnificent English gardens and provide countless private spaces for meditation and contemplation.

After our brief whirlwind tour of these sacred sites our little group reluctantly dispersed to explore some personal destinations. My journey led me to spend five days in Ireland, where I found the people to be exceptionally kind and welcoming. They were so willing and proud to share of their heritage and country.

While I could write a book about my visit to Ireland, I shall contain myself to three powerful experiences. I took a cross-country trip, from Dublin to Galway, which contained numerous stops, including a visit to a 15th century castle, and, on the Atlantic Ocean, the Cliffs of Moher and the Burren. While I’d been looking forward to the coast portion of the trip, it was the visit to the castle that had the most impact for me.

I’d never been to a castle before, and as I stepped through the doorway, I felt an intuitive energetic response of “UGHH!”! It could only be described as a heavy, heavy weight and a strong aversion. As we gathered in the main hall, our young guide started her introduction. “I am sure you are all thinking about what an interesting place this must have been to live, but let me tell you that it wasn’t.” She proceeded to explain to us about life in this environment.

It was a lifestyle that was all about survival, fraught with abuses of power, long cold winters and starvation. One man, be it the duke, earl or king, held all the power (over about 120 other beings) and needed to exercise his power daily to secure his position.

Obviously I was pleased that our guide’s descriptions fleshed out the energetic sense that I had gotten, walking through the door. A short time later I started to think of the karmic ramifications of that time and lifestyle—how individually so many souls were affected by the abuses of power, unfair treatment and extended suffering. Then I had a more frightening thought of how little civilization, or the human experience, has changed in the centuries since.

My second powerful experience in Ireland was my visit to Newgrange, an ancient burial chamber located an hour north of Dublin. The Newgrange site from the outside measures about an acre and looks like a large round hill, with megalithic kerbstones forming the exposed foundation. To enter the chamber one goes through a doorway that has a lintel above it and walks a passageway that is 19 meters long. The chamber has a corballed roof, is over 5,000 years old, and has never leaked.

Most remarkable of all is that on December 21st (the Winter Solstice) the first morning sunlight peaks over the horizon, enters the lintel, and illuminates the passageway into the burial chamber room.

Scientists estimate the structure took 2-3 years to plan and gather the materials needed for construction. Furthermore, it took 40-60 years to construct and was built by an agricultural community where the average life expectancy was 35 years old. Therefore the building process took at least two generations to complete, and the originators most likely didn’t live to see the final structure. Wow!!

It is truly a remarkable site, and energetically highly charged, the effects of which remained with me for a good hour after I left. The thought that occurred to me several hours later was an interesting comparison between our two cultures. Here was an ancient culture that, through extreme and sustained dedication and community effort, built a structure that survived intact, water tight, and magnificently functional for over 5,000 years. I wonder what structures we work hard to produce and how long they survive.

After three nights in Dublin I left the big city (going two hours south) to Glendaloch, to spend the night and visit St. Kevin’s Monastery. The ruins were very special, and miraculous stories of St. Kevin abound. The green narrow valley, complete with a creek and two lakes, was spectacular and restorative to my soul. While being nestled in the lush Irish valley I became slightly homesick for our expansive one. Two days later I arrived back home in Colorado. After settling back into Crestone, I realized that this pilgrimage provided me with the opportunity to see some truly powerful places and experience some very different and ancient cultures. I also was reminded that I live in an amazingly energetic vortex site. There is no place like home. 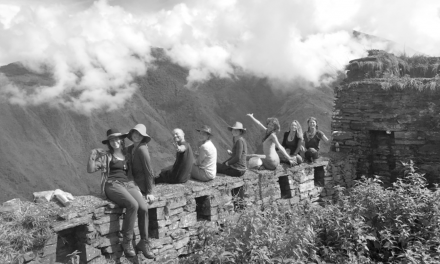