There is probably no more bitter or pessimistic piece of writing in all of literature than T. S. Eliot’s The Waste Land.  In the final section he describes a landscape where there is no water.  Then he asks us to imagine what it would be like if there were water, and the sound of water, a spring and a pool and a hermit thrush singing in the pine trees.  It is a pretty picture which he then destroys in the next line: But there is no water.  Eliot had encountered the hermit-thrush in Quebec but he could just as well have encountered the bird here in Crestone.  The bird’s song as described in Eliot’s notes is pure, sweet, and exquisite, and can be heard west of Wagon Wheel on the Spanish Creek Trail.

I have been hiking the Crestone trails since 2010 and there identified many wonderful birds including the Western Tanager and the Black-headed Grosbeak at the meadow under Willow Lake.  But in the last two years I have noted a precipitous decline in the number of birds and bird species.  Clark’s Nutcrackers,  White-breasted Nuthatches, Mountain Chick-a-dees, Hairy Wood-peckers, Hermit Thrushes, Black-headed Grosbeaks and  Spotted and Green-tailed Towhees have all disappeared from the Willow drainage west of Badger, and Townsend’s Solitaires from Spanish Creek. Despite our snows last winter, years of drought, warmer temperatures and the impact of humans and feral and domestic predators have taken their toll.  I have not seen the Western Tanager or the Black-headed Grosbeak up at the meadow for two years now and it is really very worrisome that so many birds should have just vanished.

I moved to Colorado from the east to hike and bird watch, and like many who move to Crestone, I came to give more attention to spiritual practice.  For me, watching birds and hearing their songs is a way of giving thanks and praise.  Every week each summer season, my dog Sarah and I hike to one of the lakes above Crestone and this June, I began with Willow.

There was a day three years ago when on the first set of switchbacks of the Willow Lake trail I came upon Chick-a-dees, Nuthatches and Wrens all coming to the aid of a parent Robin trying to fend off a Cooper’s Hawk and a forest full of lurking Crows.  Perhaps my presence tipped the balance, but the little birds won out, and for the time being, the hawk and the crows backed off and the robin and his nestlings were safe.  Today, I am hoping I will see at least one of these birds and my optimism is buoyed when I hear a Hermit Thrush as I sign the register at the Willow Trailhead.

Sarah and I settle into the rhythm of our steps in the crisp early morning air.  As we come to the ridge overlooking the meadow I have seen no birds and only now hear the songs of a House Finch and a House Wren.  I watch the Wren, tiny as he is, belting out his wonderful, large, warbling song.  The Black-headed Grosbeak and the Western Tanager are nowhere to be seen but the sun has come over the peaks, the day warms and I can hear the bell-like whirr of the Broad Tailed Hummingbird.  Sarah and I walk down to the meadow so she can drink before we start up the next set of switchbacks, and in the aspen trees at the meadow’s edge I identify a Warbling Vireo.

This next set of switchbacks is particularly lovely for the scent of the trees and just as we are coming into a deeply wooded place I spot the soft and gentle motion of a Thrush. In the next moment she is gone and I am so grateful to have seen this shy and elusive bird.  When we break out of the forest, the trail passes under the first waterfall and up the rocky face of the mountain.  I balance across rocks and wobbling logs and the footing is wet and slippery.  Sarah hates to get her feet wet, but she always seems to get across these torrents with a minimum of fuss and so do I.

At the top of the next set of switchbacks we enter a willow forest on a terrace below the lake and hear two more Hermit Thrushes singing back and forth and two Mountain Chick-a-dees.  When we arrive at the lake we hear one more Thrush bringing the count to 5.  It is only 11:15 and I wonder if we can explore the valley above the waterfall at the east end of the lake.  I try to quell the nagging doubts about moving into such a stark and fearsome landscape.  It is a landscape where we’ve never been, of ghosts and intemperate moods.  But Sarah is game; she’s noticed the abundance and variety of rodent life: chipmunks, marmots, and pikas, and we set off.

A big reddish brown marmot watches us as we scramble through willows and over boulders and loose rock on the north side of the lake.  I fight off the vertigo that comes from looking over the cliff edge; hikers arriving at the west end of the lake look like ants and the sound of falling water echoes off the mountain sides. Then we break out of the willows and into the upper valley, beyond the waterfall and into the weight of profound silence.  We cross the rushing creek, cross conglomerate rock that looks like it has been dipped in iron, red against the rushing water and the blue green willows and the overarching sky and the ring of peaks.  We walk another quarter of a mile or so and then I begin to spook.  We are so purely alone in this high and silent place.  I want to stay here forever but at the same time a litany of fears begins to assert itself: I shouldn’t hike alone; going down is harder if you are tired, the weather can change in an instant, etc.  So without a second look, I turn to go back in the same spontaneous way that I came.  And all the fears and reasons are true enough I know but none are really close to the truth, that I am just not ready to fly this close to the sun.

Once we are back on the trail below the lake, clouds boil up from the valley and we walk in shadow. There is no bird song at all, only silence.  At the meadow I hear one bird singing, only one and it sounds vaguely familiar, something like the Eastern Towhee I grew up with, that same lilting, complicated song only different.  And then I see him—the Green-Tailed Towhee with his auburn topnotch and white throat and green back and tail.  He is singing as if his heart will burst.  These fragments, Eliot writes, at the end of his poem, I have shored against my ruins. Well, maybe.  But I don’t care if this is the last Green-Tailed Towhee on earth.  Right now he his singing his song and I feel like leaping for joy. 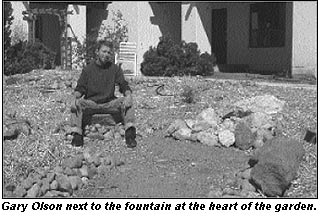 The Whitten Ranch: Holistic ranching in the San Luis Valley

A journey to China