Garden Guru: The Season Wraps Up

October gave us some hard freezes, and winter is on its way. Time to preserve the harvest and take stock of the growing season.

Some things did very well this year, partly because of the unusual moisture and cool weather we had for much of the growing season. Hardy greens grew very well in the cool dampness. I had some kale plants that survived the winter and made abundant greens all season. Interestingly, though, broccoli plants were slow to produce heads and instead put their energy into leaves. However, I planted about a dozen Cheddar cauliflower plants that made successive heads all season. Wonderful plant. Cabbages did well. I have three Brunswick plants with heads about 14 inches across. Several purple cabbages are smaller, but did fine. Have you tried purple cabbage coleslaw?

Tomatoes were very slow to make fruit and ripen it. Although the plants grew fairly well, I believe the ground was too cool for the plants to create and ripen fruit. Whereas I usually have large tomatoes ripening outside by the first week of August, this year it was more like the first week in September. As a result, I picked a lot of green tomatoes and laid them out in shallow boxes to ripen indoors. If all goes well, I should still have some for Thanksgiving.

I had a very bad experience with mildew on the squash plants this year. It was my own fault. I bought some plants in the spring that had mildew. I thought it would go away in our usually dry climate, but instead it spread to almost all the squash plants. Between the mildew and the cool weather, most of my squash harvest was disappointing.

There were some pleasant exceptions, however. I decided to grow the Three Sisters—corn, beans, and squash—all in one bed together. I chose Hopi squash and Hopi beans from High Ground Gardens, our local seed producers. Maybe if I had also chosen Hopi Blue Corn, it would have worked better, but I chose an early sweet corn, Northern X-tra Sweet. I planted the corn seeds about eight inches apart, and the beans in between the corn. The squash seeds I planted about every 18 inches apart. All seeds were in the same rows.

That turned out to be way too close together. The Hopi Squash were so vigorous that the vines and leaves covered everything and, using the corn as a support, grew up and over the corn. When the corn tasseled, the little silks on the infant ears that are supposed to receive the pollen from the tassels were almost totally covered by squash leaves. As a result, the ears of corn were very sparsely pollinated and had only a few kernels per ear. It was also difficult to get into the patch to do any maintenance, or to pick the beans. Fortunately, the mass of squash and bean leaves prevented any weeds from getting much of a start.

Fortunately, the squash did very well, producing a nice medium-sized, mostly orange fruit on every plant. The ones I have tried taste very good and have a fine, smooth texture. The beans were a good choice, too. They were the only ones to mature dry beans this year. All the other “green” beans got caught by the frost and did not mature seeds, but the Hopi beans, a tan bean with dark purple markings, matured early enough to make dry beans. I’m looking forward to cooking up some, as well as saving some for next year’s seed.

The corn, of course, was a disappointment. This system needs a corn that can shoot up above the vigorous squash leaves as well as hold its own with beans climbing up it. Next year I’ll try it with the Hopi Blue, also available from High Ground Gardens.

I’ve also been harvesting piñon seeds. The piñons are producing well after all that rain we had earlier, and are dropping to the ground in sufficient numbers to be worth collecting. Some trees are really loaded, while others have very few seeds.

I’m doing some experimenting. I’ve discovered that the best nuts are the ones with the dark brown shells. Lighter brown shells are often empty. I tried putting them in a pan of water to see if the good ones would sink while the empty ones floated. It is true that the ones that sink are almost all good and full of plump, edible kernels. However, the ones that float may also have kernels worth cracking, so that experiment was only partially successful. After I left the seeds soaking for a while, the shells were much easier to crack, however, splitting along the seams much more easily than before.

Next, I tried roasting them, mainly to see if that would make them easier to crack. I didn’t want to get them too hot, so that they would scorch, or lose their nutrition, so I put them in the toaster oven at 200° for about half an hour. I did not notice a lot of difference in taste, but it did make them easier to crack for a time. As they cooled, they seemed to become harder to crack, again. [Ed. Note: roasting will also prevent the nuts from becoming moldy when stored.]

However, I think I discovered a good tool for cracking them—a pair of pliers set on the widest setting. Most old-fashioned pliers have a close setting and a wide setting. The wide setting seems about perfect for cracking Piñon nuts without smashing them. This is made even easier if they are soaked first. I can crack several with the pliers, then pull the shells back and find the nuts. Much easier than other ways I’ve tried, and much less likely to break my teeth.

Happy harvesting to all!

As the Worm Turns: My pampered lettuce 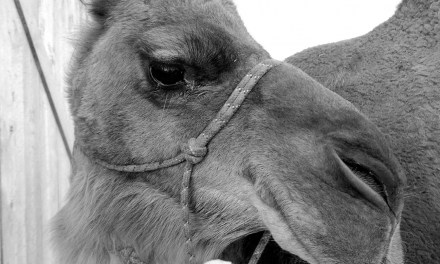 Homesteading with camels A recipe for success

Year of the Woman: Colorado was the first state to give women full suffrage

As the Worm Turns: Growing Food in a Hotter, Drier Land