Is hemp the valley’s crop of the future? Part 1 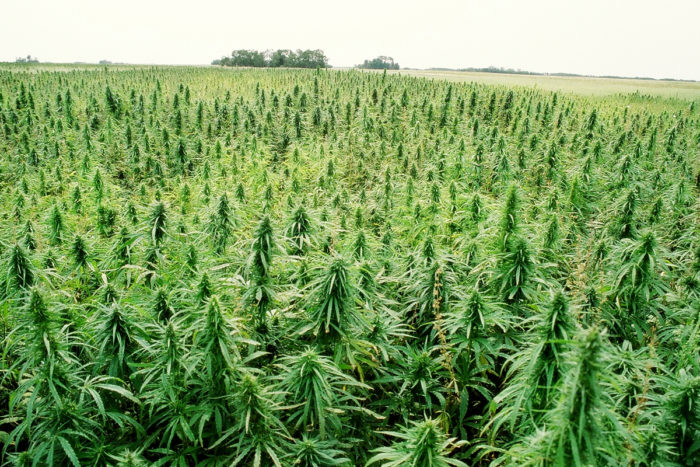 Is hemp an economically viable crop for the San Luis Valley that can contribute much-needed county revenue and offer good jobs? Jason Anderson, Saguache County Commissioner, says the county has two growth industries—retirement and cannabis, and the two do not often see “eye to eye”. Can they come together over the health, food, and fiber benefits offered by hemp?

Confusion over the term cannabis, and hemp, is part of the problem. Cannabis is a genus name, while sativa, indica or ruderalis are species names within the genus. Plants with similar names have very different constituents and uses by humans. While plants typically known as marijuana have tetrahydrocannabinol, or THC, a psychoactive substance that is responsible for the “high”, hemp plants are known for their cannabadiol, or CBD, a constituent with numerous healing properties, but no “high”. There are over a hundred other constituents in hemp that have not yet been widely studied for their useful properties, as research has been hampered by the illegality of the whole group.

The 2018 Farm Bill changed that. Hemp can now be grown legally, under controlled conditions. Prior to passage of the bill, Colorado was one of two states that allowed trials, so several farmers in the valley have grown hemp since 2014. Two distinct types of hemp with two different uses are being grown in the valley: those grown for CBD oil and those grown for seed and fiber.

CBD oil for medicine is made from the flower buds of certain varieties of hemp. One official drug, Epidiolex, has been approved by the FDA for two rare types of childhood seizures. Other health-related uses are not yet well tested, although many tests are now underway. However, CBD oil has become popular for several chronic conditions, especially those involving inflammation and seizures.

Plants for CBD oil are bred, trained and trimmed for high CBD production. They are plant strains with a branching form that produce lots of a resinous substance, especially on female flower buds formed at the end of branches. Upon harvest, the bud is dried, pulverized, then soaked in a solvent, usually ethanol. The plant material is then removed by filtering, straining or centrifuging, leaving liquid solvent and the soluble plant extracts. The solvent is then removed, which leaves a gummy greenish-black resin containing the cannabidiol as well as other cannabinoids, terpenes, and plant residues. More sophisticated processing may yield a more refined product, but many feel the diverse residual products are desirable. This resin is usually then diluted with a carrier oil, such as olive or coconut to create the final product with less than .3% THC.

The other, more historic uses of hemp are for fiber and seed. For generations, the longest and strongest fibers available to mankind were hemp. The first United States flag, allegedly made by Betsy Ross, was made of hemp. Hemp was also used to make the sails and ropes for the fleets of sailing ships the plied the seas until steam, gasoline, and diesel engines took over. Only with the advent of synthetics such as nylon could hemp be replaced for rope and other strong textiles.

The seeds are incredibly nutritious, offering one of the only vegetarian sources of complete protein. According to Medical News Today, “Hemp contains all 10 essential amino acids, making it a good plant-based protein source. Hemp does not contain phytates, which are found in many vegetarian protein sources and can interfere with the absorption of essential minerals.”

Hemp seeds also yield a high-quality food-grade oil which contains both Omega 6 and Omega 3 fatty acids in good proportions. The list of uses for the plant goes on and on. These plants grown for fiber and seed are usually tall and thin in order to get long, strong fibers, as well as a harvest of nutritious seeds.

To learn more about this plant and its properties and uses, and to answer the question about its economic viability for the valley, I had to explore further. Since water is key to success, I wanted to know more about the water needs of hemp as a crop.

My first stop was the Southern Rocky Mountain Agricultural Conference in Monte Vista where I listened to Dr. John McKay, Associate Professor at CSU. He is also the Director of Genetics at New West Genetics where he is working on breeding hemp for row crops. (newwestgenetics.com) Dr. McKay said his company is dedicated to breeding hemp seeds that meet a 0.2% or less content of THC, which is below the current criteria for hemp, while also focusing on height, maturity and 96% germination. They are investigating hemp varieties that yield grain and flowers, and that have a dense canopy to discourage weeds. When asked about water use, he stated that not much research has been done, but that plants used for CBD oil use more than those for fiber and seed. He believes that hemp for grain uses about the same as winter wheat, while that for CBD oil uses a little less than corn or potatoes.

When asked what the main limiting factor is for growers, McKay stressed markets. He said that there are currently many more growers than places that purchase hemp. A lot of infrastructure will need to be built and markets developed to take advantage of hemp.

Marvin Reynolds, CSU Extension Agent for the SLV and main sponsor of the conference, said because CSU receives federal funding and could not spend it on a federally illegal crop, CSU’s research on hemp is in its infancy. He anticipates more research in the future, now that hemp is legal at the federal level.

I next contacted Caren Kershner, a former Moffat science teacher who, upon her retirement, has led the exploration of hemp as a valuable agricultural product for the upper SLV. She has shared some of her research on the Facebook page for Colorado Industrial Hemp Coalition.

Kershner was speaking at the San Luis Valley Seed Exchange at Joyful Journey Hot Springs Spa on Feb. 9 and 10. Kirshner brought samples of hemp fibers and textiles to show its versatility, and listed some of the uses. Seed can be used for hemp oil, both edible and industrial; hemp foods such as hemp milk, cheeses, and seed products; animal feed, including seed and oil cake for livestock; and seeds, both for planting and sprouting for food. Green plant material yields cannabanoid and terpene extracts that can be used for salves, as well as topical and internal medicines. She also noted that male plants, as well as female, have very strong fibrous stems that can be used for hempcrete, paper, rope, textiles and insulation. Matting, another fiber product, can be used for animal bedding and mulch.

For CBD production, female plants are preferred. These are the ones that provide the flower-head clusters used to make CBD oil. Male plants are usually pulled out to prevent pollination and seed development and to protect the preferred strain of plants. While seeds can be used to reproduce plants, clones are often the preferred method. Clones do not deviate from their parent and can be counted on to not exceed the 0.3% THC, provided, of course that the parent is as declared. Seed-grown plants are more likely to have crossed with wind-blown marijuana pollen and may produce offspring that could exceed the 0.3% THC legal level. Hemp pollen has been known to travel over 3.5 miles. Wind may carry it further.

This year’s Seed Exchange was primarily organized by Bob Pedersen of Beyond Organica, and the Sunday event focused on hemp. Several speakers and vendors were represented. I attended a presentation by Terry Moran of the Colorado Dept. of Agriculture, who spoke about the CDA’s role in enforcement of state regulations. All growers of hemp must register with the CDA and are subject to inspections, which include sampling of the crop to determine that THC levels do not exceed 0.3%. There are pre-harvest, post-harvest, and unannounced inspections. Moran recommended potential growers check out the CDA website for compliance information.  Moran also said, as of October of 2018, there were 30,825 acres of hemp under cultivation in Colorado, 40% of which were on plots of 5 acres or less, as well as 4.8 million square feet of indoor growing area.

One thing I noticed about the meetings I attended was the level of excitement and anticipation among the participants. Many people see this “new” crop as a great opportunity to help humanity, as well as themselves. Next month we’ll meet some of those people and see what they have to offer.

The new Moffat School is open for classes