October will be an extraordinary month for eclipses. On October 8 there will be a total lunar eclipse in the pre-dawn hours. The first hint of the eclipse shadow should be visible around 2:45am MDT, growing in magnitude to the onset of the partial eclipse at 3:13. The total eclipse starts at 4:25 and ends at 5:24am. Be sure to drag yourself out of bed before it ends.

During totality, the moon will be entirely within the earth’s shadow. The moon should glow red or orange due to all the sunrises and sunsets that ring the earth. Passing through the earth’s atmosphere, sunlight is bent and reddened. It’s impossible to predict exactly what we will see. The moon could be anywhere from a bright copper penny to a brown milk chocolate bar. If there have been a recent volcanic explosions, the moon could be dark red or even almost black. In many ways a total lunar eclipse is more ominous than a solar eclipse. It lasts longer and appears covered by blood.

It will take the moon two weeks to position itself between the earth and sun. The result will be a partial solar eclipse on October 23. In most of eastern North America the sun will set while it is eclipsed, but in Crestone we should be able to see all stages of the eclipse, from the first bite of the sun taken by the moon, to the maximum amount of coverage, which, for us, should be about 50%. The time of maximum will be approximately 4:40pm MDT. Whatever you do, don’t stare at the bright sun. Ordinary sun glasses will not be safe. One good way to view the eclipse is using pin hole projection. Get a large cardboard sheet with a hole in it covered by a sheet of aluminum foil. Puncture a small hole in the aluminum, and project the image on a sheet of white cardboard. Also, position yourself near your favorite piñon pine and look for a myriad of random pin hole projections produced by the intersections of needles and branches. You can also make little holes by passing your hands over each other, or you might enjoy creating projections of the sun using your armpits and performing a chicken dance. This partial eclipse is a prelude to a great total eclipse crossing the US on 21 August 2017, when the shadow of the moon will pass from Oregon to South Carolina.

An update on Rosetta and its comet

Rosetta will release Philae from a distance of about 10 kilometers above the comet. The probe will drift unguided towards the landing target, taking 7 hours. Once on the surface, the lander will try to tie itself onto the comet with harpoons and ice screws. This landing site still contains a few boulders that could capsize Philae on landing. And, there are cliffs nearby. Finally, you will note that there are some round areas (see the figure) that appear to be craters but may be vents from which gas will begin to spew forth when the comet gets closer to the sun. It is dangerous but exciting because all of these hazards are great opportunities for learning more about the origin of life on the earth.

Water on the earth may have come from comets. The seeds for life on the earth may also have come from these wonderful creatures. We know that comets contain complex organic molecules that are rich in carbon, hydrogen, oxygen, and nitrogen. These are the elements that make up nucleic acids and amino acids, essential ingredients for life as we know it. Philae as well as the mother ship, Rosetta, will search for amino acids (the building blocks of proteins) by sampling and analyzing the comet’s nucleus and comet’s cloud of gas and dust.

Upon landing on the comet, Philae will explore a long standing puzzle about why essential amino acids on earth are almost all left-handed. Handedness refers to the spiraling arrangement of atoms relative to the to the carbon core of the molecule. Most asymmetrical molecules in our world are arranged in approximately equal numbers of left- and right-handed configurations. The primary left-handed structure of amino acids used by living organisms is indeed a very tantalizing puzzle. One hypothesis is that these molecules were formed in equal numbers deep in interstellar space, a long time ago, and then radiated by spiraling radiation from a nearby supernova. The circular polarization of that radiation destroyed one type of “handed” molecule. Radiation pressure pushed the surviving molecules out into space, where they eventually ended up on a planet like Earth. It will be fascinating to learn if the amino acids on the comet are equally matched or are all left-handed. If they are equally matched it may mean that the amino acids in our bodies came from another source or that the initial development of life on the earth preferentially used the left-handed molecules. Being a left-handed creature myself, I consider this puzzle to be extraordinarily fascinating. 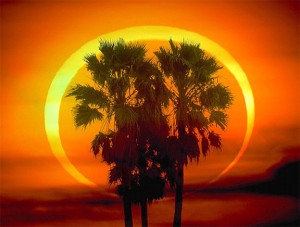