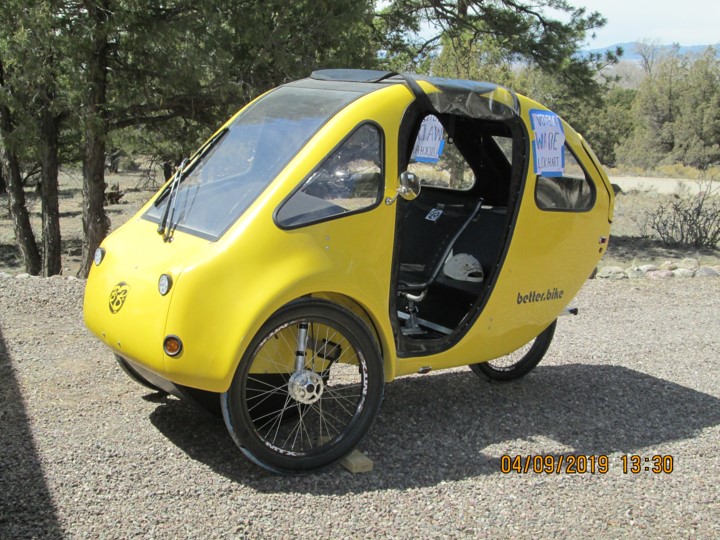 If you have seen a yellow unusual-looking vehicle on three bicycle wheels around town, it’s a PEBL. That’s the abbreviation for Pedal Electric Bike for Living. It is an all-weather fully enclosed pedal electric-assist tricycle made by Better Bike in South Deerfield, MA. I first became aware there was such a thing two years ago when I was up in Fort Collins and saw an ELF, a three-wheeler similar to the PEBL. I immediately went to YouTube, found the ELF, and also found the PEBL. After much deliberation I chose the PEBL and ordered it in March of last year. It was delivered this February, and after the spring thaw I was out and about getting acquainted with my PEBL. I must say, it has been a learning curve for me. It is bumpy, slow, and fits somewhere between a bike and a car. But now the PEBL and I are friends, and it is a mixture of fun and satisfaction.

So why do I call this solar transportation? You actually can order a PEBL with a PV panel on the roof for charging the battery. But I did not, because I park it under a carport. Instead, I have two PV panels that power a mini backup electric system in my house, and I now use this PV system to charge the batteries. I reprogramed the charge controller for the PEBL lithium batteries. I can now bring the batteries into my house for charging, and also use them to power my backup home system when the grid is down.

Lithium is the element replacing lead in the new batteries. These batteries have the highest electric energy density of any commercially available storage batteries. My 30 lb. PEBL lithium batteries store ten times the electricity of the 300 lb. lead acid batteries I used previously. This is what makes the PEBL practical and is what is revolutionizing bicycles and cars. Lithium batteries power your smart phones, computers, and innumerable device in your lives. They power the Tesla. China makes more electric cars than the rest of the world and they are all powered by lithium batteries. Lithium batteries are now being developed for large scale utility electric storage.

The PEBL weighs around 200 lbs. and is slightly over eight feet long. With the standard battery it goes up to 20mph and has a range of over 20 miles. I ordered a larger battery because of the hills here. It has lights, turn signals, a horn, and windshield wipers. It has trunk space and a small back seat. It comes standard with a small 120-volt plugin charger. Base price is around $7,000. You can get information at info@better.bike.

The future of transportation is vehicles utilizing renewable energy. Elan Musk designed the Tesla with solar electric charging in mind. Until free energy machines and the attraction force of magnetism are harnessed, solar and wind is the bridge energy source. Do you want clean air and water? Think renewable. If you are not using renewable energy, start small like I did. Start somewhere, anywhere that reduces nonrenewable dependence. Get a lithium battery-assist bicycle. If you do use renewable energy, try to do more. Anything that reduces your carbon footprint is a plus for the planet.  See you around town.

Biodiesel, Rapeseed and GMOs: Is SLV canola the right way to go? (February 2005)

How to design your green dream home 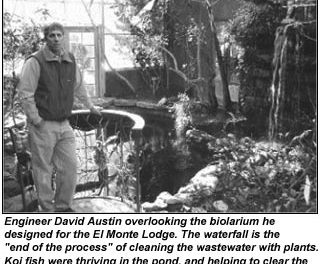